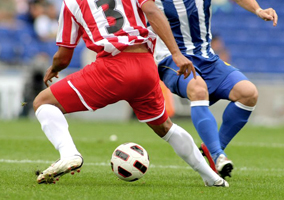 Enrich Physio’s director and consultant physiotherapist Richard Walker played football professionally and has worked with many football clubs as their physio – currently Brechin City. With this amount of experience in football we feel it is fair to describe Richard as a specialist in the area. Richard also has an Honours Degree in Applied Sports Science from The University of Edinburgh. This gives him far greater insights into the biomechanics, nutrition, psychology and rehabilitation of sports injuries.

Richard played professional football for over ten years for Alloa Athletic, Brechin City and Berwick Rangers, making over 300 first team starts – so he has experienced his fair share of injuries in the past! He has also been Head of Physiotherapy in the Irish Premier League with Shamrock Rovers, experiencing Champions League and Europa League football. More locally he has worked at the Heart of Midlothian Youth Academy and been Head of Physiotherapy at Berwick Rangers and he now leads the Physiotherapy Team at Brechin City.

Enrich Physio are proud to provide specialist physiotherapy treatment to Edinburgh City and Tynecastle Football Club as well as a list of other Lowland League, East of Scotland, Junior, Ladies/Girls and Juvenile clubs. If your club would like to receive specialist football care with Enrich Physio then please mention this when booking and a generous discount will be offered.